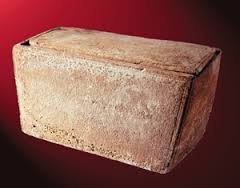 The lengths people will go to ignore Jesus, or even deny His existence, is obvious in the case of the much debated and examined ossuary with the inscription, "James, son of Joseph,brother of Jesus.".

An ossuary is a stone box with lid used in Israel for centuries to collect the bones of the deceased. After the body was buried and decomposed the bones were gathered and placed in an ossuary. The inscription of the name of the person was engraved on the outside. This was necessary because often these boxed were kept with the bone boxes of other members of the extended family.

Genesis 50:25 (NKJV)
25  Then Joseph took an oath from the children of Israel, saying, "God will surely visit you, and you shall carry up my bones from here."

This particular bone box was first reported in the Biblical Archaeology Review in 2002. Immediately detractors began to claim it was a forgery. In 2005 forgery charges were brought against the owner. The trial lasted 7 years. If it were found to be genuine, it is the oldest written reference to Jesus. The trial ended with the acquittal of the owner. Case over. Right?

Those who still wish to deny the ossuary's authenticity have formed a committee of their own. They have assembled a committee of "experts" to determine its authenticity for themselves. The committee's report admitted that it had chosen some members who had "expressed an opinion on the subject." Closer scrutiny reveals that these members had already expressed outspoken opinions to the effect that the inscription was a forgery.

Why such aggressive attacks against the "realness" of the box. In my opinion the answer is simple enough; to remove another evidence of the most important and controversial person in history: Jesus Christ, the Son of God. How adamant would the opposition have been if the name were some obscure first century politician or wealthy citizen? What if it were a Roman senator? Would there be such an effort to discredit it or it's owner? I don't think so. When the name of Jesus is mentioned there is always controversy. The truth is those who hide in the disciplines of science have free reign to obscure and deny the existence of God in the publications of their own making. However, when God makes an unannounced visit into their own well guarded world, they rush to discredit His reality.

So what did the biased committee determine concerning the authenticity of the limestone box containing the name of Jesus, His brother and earthly father? In the end, the committee members unanimously agreed that the ossuary inscription is a forgery. To quote Gomer Pyle, USMC, "Surprise, Surprise, Surprise!" The length the world will go to deny Jesus has no limitations. However, they may take heed to the words of the One they wish to ignore:

The comments to this entry are closed.